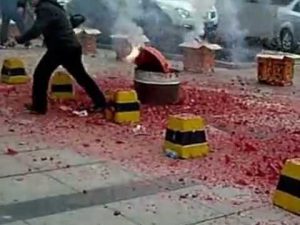 Many ways to reduce urban noise in China

According to a recent report issued by the Ministry of Environmental Protection, a quarter of Chinese cities exceeded the limits on noise pollution last year. Beijing News commented on Monday:

Chinese residents are no stranger to noise pollution, ranging from late-night construction to daytime traffic. They suffer from a variety of noises on a daily basis, but their complaints are often ignored or not dealt with properly.

Noise pollution, in effect, can be as harmfull as air, water and soil pollution, as it is a major cause of insomnia, even heart attacks.

There have been successful attempts to curb noise pollution in some countries. In Japan, construction sites are always surrounded with heavy shields to prevent noise and dust from spreading out. Germany has specific limits on road decibels and has applied noise reducing technology to its roads.

In comparison, China’s solutions to the noise problems, be they technological or legislative, still lag far behind. Neither the environmental protection authorities, who are supposed to take care of industrial noise, nor the police that should play a role in curbing traffic noise do their job properly. And public complaints about urban noise pollution often fall on deaf ears.

Building roadside shields should be a viable solution to traffic noise pollution. But they are poorly built even absent in many cities due to the lack of cooperation among departments. The noise pollution policies need to have more teeth to effectively tackle the problem.